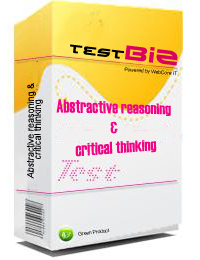 The aim of the test is to measure the degree to which you can calculate, measure, control, discriminate relations, analogies and use inductive and productive reasoning in order to conclude about implied and indirect connections among abstract meanings, words, letters, numbers and figures.

a) The ability to trace numerical analogies. That is, the ability to find out the underlying relations within a sequence of numerical symbols and the rules that underlie it.

b) The ability to trace the analogies between words and letters. That is, the ability to find out the underlying relations and bonds based on specific laws and rules.

c) The ability to trace analogies in a sequence of figures. That is, the ability to observe that there can be rules, which define the way in which, geometrical or other kinds of figures are arrayed or differentiate.

e) The ability to perceive and process stimuli and examples, which can be considered as unrealistic. That is, the ability to detect relations and analogies among stimuli, which do not exist in everyday life, such as a sequence of numbers or figures.

g) The ability to trace logical structure within stimuli and general totalities. That is, the ability to apply logic so as to understand and check the propriety, sequence, systemization, uniformity of analogy of things.

h) The ability of reductio ad absurdum and the ability to think based on possibilities. That is, the ability to decide on stimuli and the relations among them based on what is possible or by exclusion of the options that evidently are not appropriate.

i) The ability to use productive, inductive and analogical reasoning is extremely developed. That means, a person's ability to conclude on the attributes of things and symbols by leading thought from general and abstract to specialized and specific (for example, food has calories, onion stew is food, so onion stew has calories) or from specific to general (for example, if John places his hand in the jack he will experience an electric shock, the same will happen to Nick, Kostas, etc. if they do it. So, the human body is a good wire way of electricity) or by leading thought from specific to specific based on the stimulis' analogies (for example, if A=C and B=C then A=B).

j) The ability to make assumptions in order to find analogies or solve problems. That means that, in order to confirm, accept or reject a solution, one leans on the scientific process of producing assumptions.

k) The ability to rapidly perceive relations and analogies among stimuli. That is, the ability to process the data of a situation in a critical and abstractive way but also within a given time.

How can GalaCritical be used?

This test can be used by the Human Resources Department of all companies all over the world both in the recruitment and the assessment process, as well as to making decisions about promotions.

The test's results may add depth to the conclusions of an interview and add value and validity to the evaluations that lie upon the human resources executives' personal judgements.

The test has been standardized using a pilot sample of 400 professionals of various professional fields allover all over the world.

More specifically, the internal consistency reliability (or alternatively known as the Kuder-Richardson formula) of the scale is:
Cronbach a = 0, 81

At the moment further research of validity and a wider standardization research is being carried out.